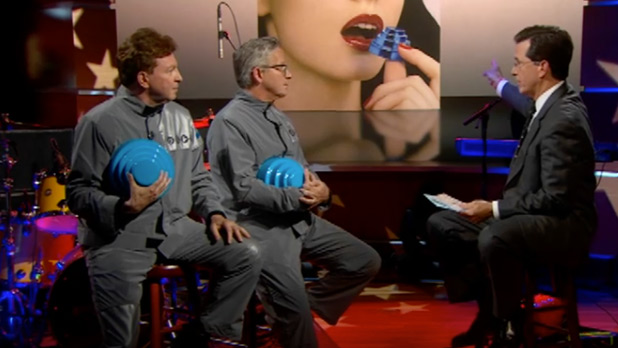 New DEVO Album “SOMETHING FOR EVERYBODY” to Stream Exclusively in Advance of Release on Colbertnation.com Starting Today, June 10th!

DEVO to Perform Live on TV Next Week!

BURBANK, CA–(Marketwire – June 10, 2010) – Electro-pop icons DEVO are pleased to announce the release of their first full-length album in 20 years, “SOMETHING FOR EVERYBODY,” this coming Tuesday, June 15, 2010. To celebrate the album’s release, fans can hear the album in its entirety beginning today, June 10th, exclusively at www.colbertnation.com for one week only. This will be the first complete airing of the full album anywhere, so be sure to log in!

Then on June 16th, DEVO will perform live on Comedy Central’s THE COLBERT REPORT that evening airing at 11:30PM EDT/PDT and 10:30PM CT.

Want more DEVO on your TV set? As previously reported, DEVO will also appear on THE LATE SHOW WITH DAVID LETTERMAN the day before — Tuesday, June 15th — the day “SOMETHING FOR EVERYBODY” is released. Tune into CBS at 11:35 EDT/PDT. But wait, there’s more! On June 18th, DEVO will also perform on LIVE WITH REGIS & KELLY. Tune into ABC at 9:00AM EDT/PDT. You won’t want to miss these DEVO televised happenings so check local lists for all of the above.

Be sure to go to www.colbertnation.com starting today!