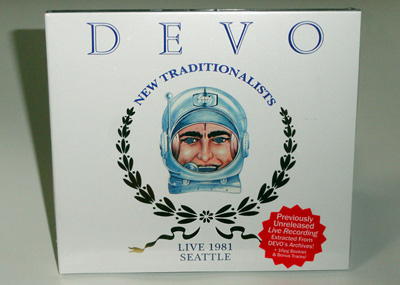 DEVO released “Live 1981 Seattle” as a 2LP vinyl set last year as part of Record Store Day, and it sold out quickly. This year we offer it to you on CD in a beautiful digipack with 2 bonus tracks, plus a booklet featuring rare 1981/82 tour photos!

From Press Release: A rare recording of DEVO live in concert during their 1981 New Traditionalists tour, extracted from DEVO’s archives. This CD was cut from a cassette recording of DEVO’s show in Seattle, WA show in November ‘81. DEVO archivist Michael Pilmer (aka Devo-Obsesso), found the tape in a shoebox full of cassettes in Bob No 2’s home fifteen years ago, which he immediately transferred it to DAT. Afterward it promptly disappeared in the flotsam of DEVO history. Here resurrected it stands as a testament to Prince’s claim “DEVO, you guys are crazy!” Yes, crazy tight and relentless like Caucasian James Browns on marching powder.

…and check out this NEW TRADITIONALISTS ASTRONAUT TEE we made in honor of this CD release!