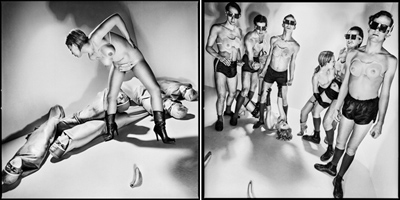 ATTN: DEVO re-issues Hardcore Volumes 1 & 2 via Superior Viaduct!
Vinyl Vol. 1 and Vinyl Vol. 2, as well as the CD, are available NOW at ClubDevo.com!

Hardcore documents DEVO’s beginning as pre-punk outcasts in the fertile Akron, Ohio underground rock scene. Spawned at the nearby college of Kent State, site of the infamous May 4 Massacre, DEVO formed as a conceptual art project armed with a radical philosophy of de-evolution. Brothers Mothersbaugh (Mark and Bob) and Brothers Casale (Jerry and Bob) along with drummer Alan Myers soon whipped-up an otherworldly brand of “devolved blues” that could hold its own alongside the beatnik groove of 15-60-75 (aka The Numbers Band) or the primal rock poetry of the Bizarros.

Recorded on various 4-track machines and in tiny studios, basements, and garages between 1974-1977, Hardcore reveals their strikingly clear vision: rock n’ roll stripped bare of its collective cool and jerked back into propaganda fit for post-modern man. Threaded beneath it all are lyrical themes of post-McCarthy paranoia, middle-class ephemera, and DEVO’s long-running topic of choice: sex, or lack thereof.

A LTD QTY ARE NOW AVAILABLE AT CLUBDEVO.COM!