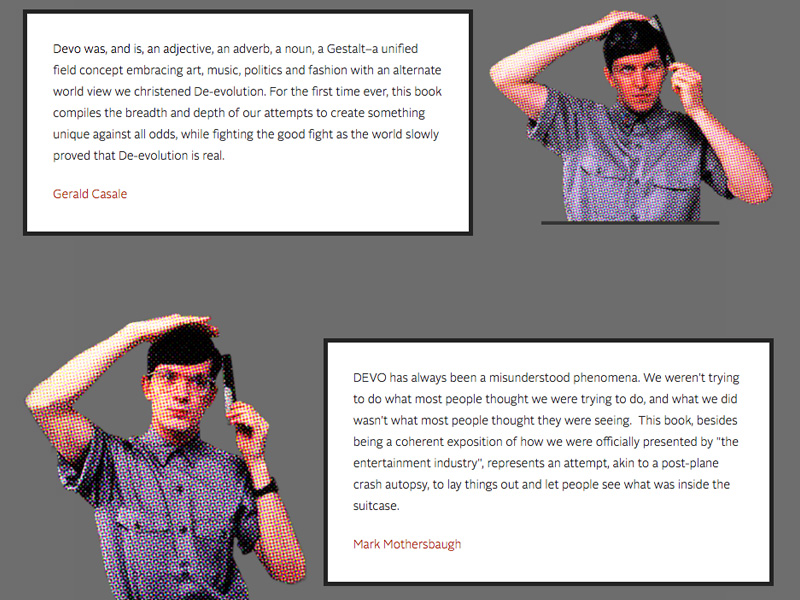 Announcing D-E-V-O by DEVO: The first, only official illustrated history of the band. Working with Rocket 88 Books, DEVO are compiling the illustrated book to tell the remarkable story of more than forty years of DEVO. For the first time the band have selected the key images that best tell how the DEVO BRAND was formulated and executed. They’ve also chosen  to UNMASK and reveal scenes from behind the DEVO curtain, with rare and previously unseen photos, drawings, plans and artworks that tell the story of the De-evolution band from Ohio…dating back from 1970 to the present day.
To ensure that the book goes ahead and to be a part of it, you must register your interest at the book’s website devobook.net.
Gerald Casale: “Devo was, and is, an adjective, an adverb, a noun, a Gestalt–a unified field concept embracing art, music, politics and fashion with an alternate world view we christened De-evolution. For the first time ever, this book compiles the breadth and depth of our attempts to create something unique against all odds, while fighting the good fight as the world slowly proved that De-evolution is real.”
Mark Mothersbaugh: “DEVO has always been a misunderstood phenomena. We weren’t trying to do what most people thought we were trying to do, and what we did wasn’t what most people thought they were seeing.  This book, besides being a coherent exposition of how we were officially presented by “the entertainment industry”, represents an attempt, akin to a post-plane crash autopsy, to lay things out and let people see what was inside the suitcase.”
Go to devobook.net to register your interest now.
Here’s a sneak peek at the Registration Site:
March 4, 2016 in DEVO-LATEST-NEWS