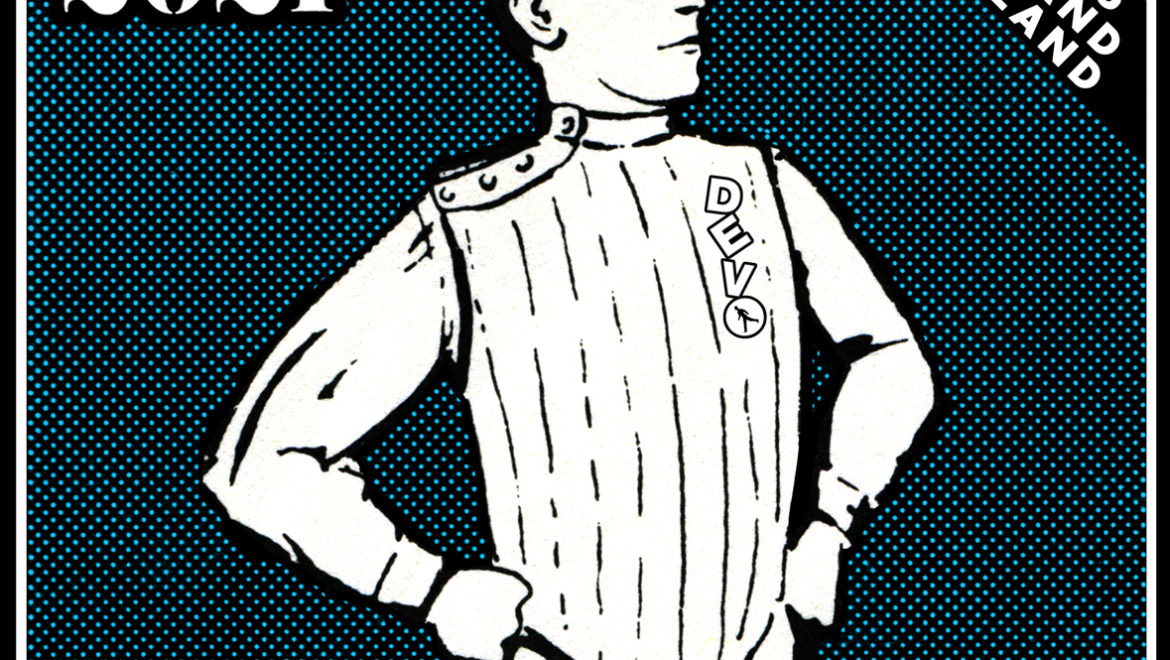 DEVOtional 2021 is set for Nov. 5th & 6th in Cleveland, Ohio at The Beachland Ballroom, and today we’ve announced TICKETS and T-SHIRTS for sale, along with our list of very SPECIAL GUESTS and PERFORMING BANDS!

PLUS: The first 100 ticket buyers get a FREE limited edition gift! CLICK HERE to buy tickets & for info on the highly devolved item. 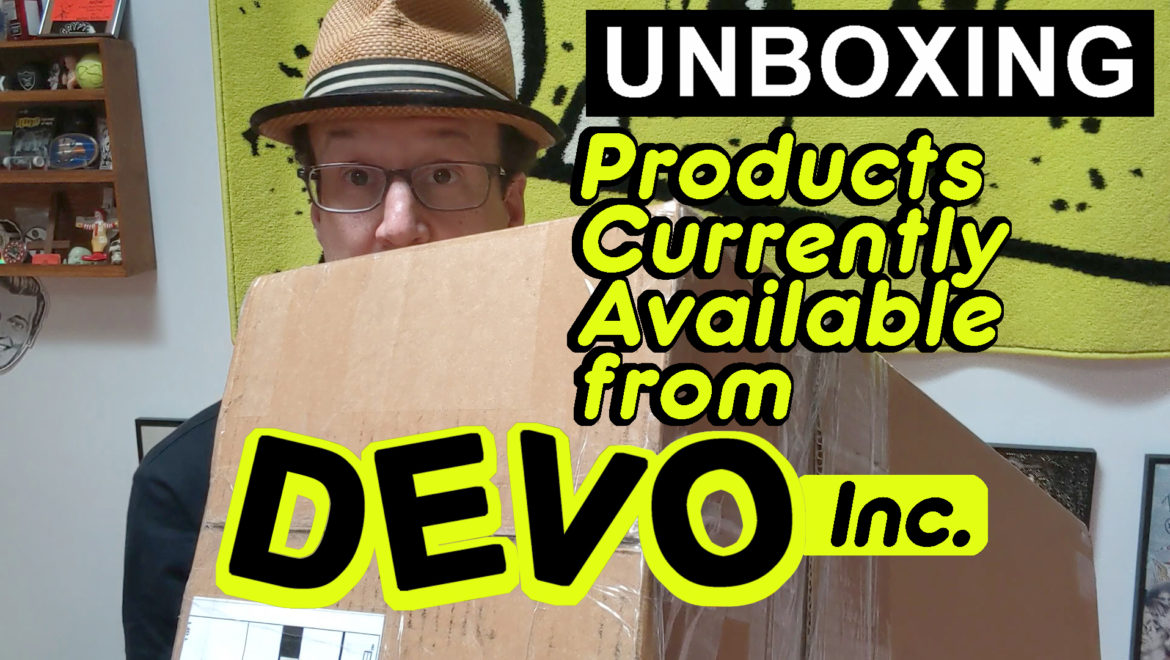 SEE VIDEO: Current DEVO merchandise on display by Devo-Obsesso (aka Michael Pilmer). All this available as part of our summer catalog at ClubDevo.com. 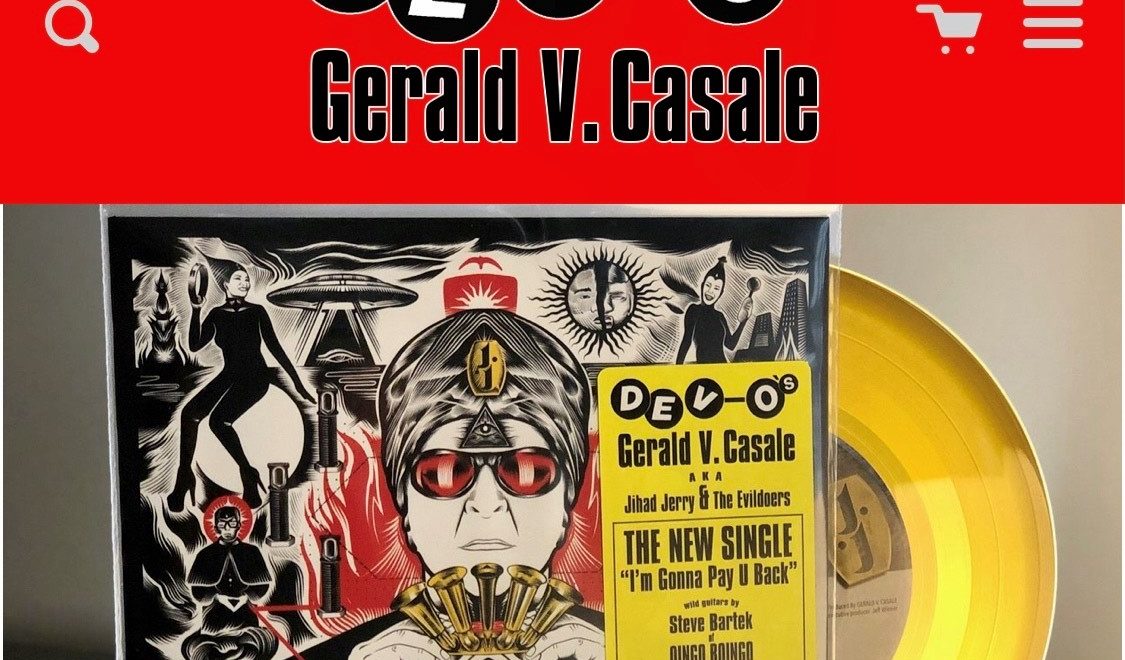 “For anyone who’s gotten the short end of the stick — The Time Is Now!” says DEVO’s Gerald V. Casale (A K A Jihad Jerry & The Evildoers) as he launches his new song and video, “I’m Gonna Pay U Back.” Watch and Listen! Also be sure to check out the full line of apparel & other products related to this release. 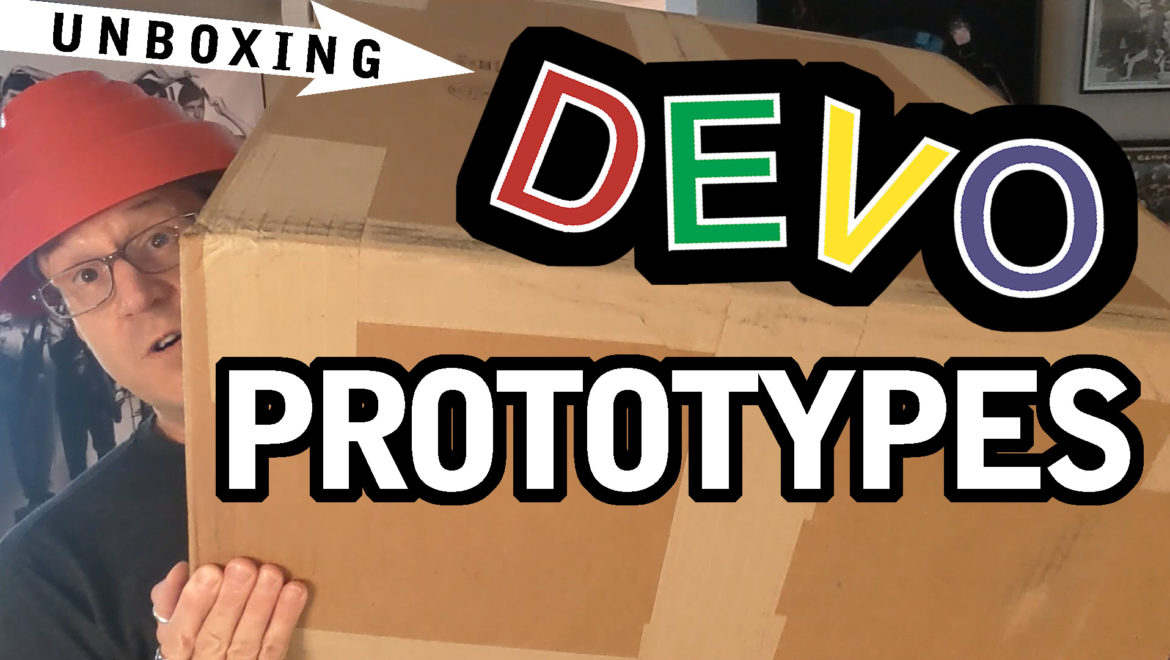 SEE VIDEO of Devo-Obsesso unboxing NEW product prototypes from DEVO, Inc.! Let me know your favorites in the video comments – There’s a good chance we will get a limited edition made of the most popular item! 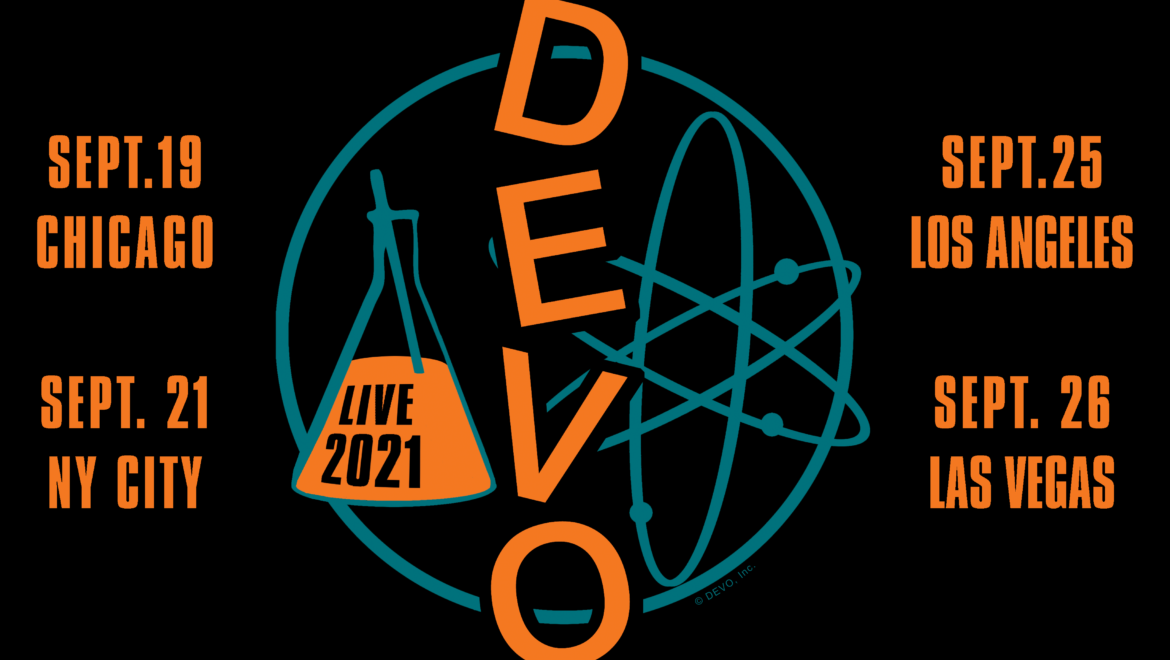 Here are gigs currently confirmed for 2021: 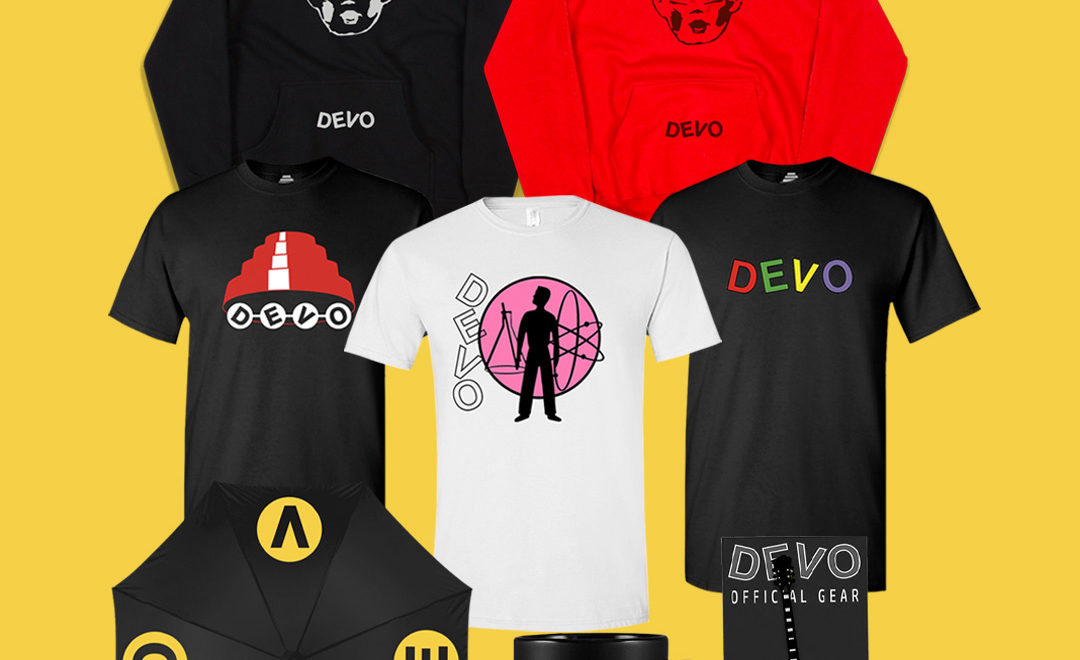 “O NO It’s Devo! That’s right. We just refuse to disappear into the polluted sunset. In fact we are in a sense re-birthing ourselves by taking baby steps toward finally realizing our goal of diversifying and letting the Devo brain trust run free. Devo is, and always was, more than a music band. It’s a meta-world view, an explosion of style and substance and an adjective and a verb as well as a name brand. With Sandbag merchandise as collaborators we are endeavoring to find new ways to prove to the world “We’re All Devo”. The launch of the new ClubDevo store and the items offered are a taste of things to come as we approach the 40th anniversary of our New Traditionalists album release and prepare to play live for the first time in 2 years! We are here to go so we hope you come with us!” – Gerald V. Casale 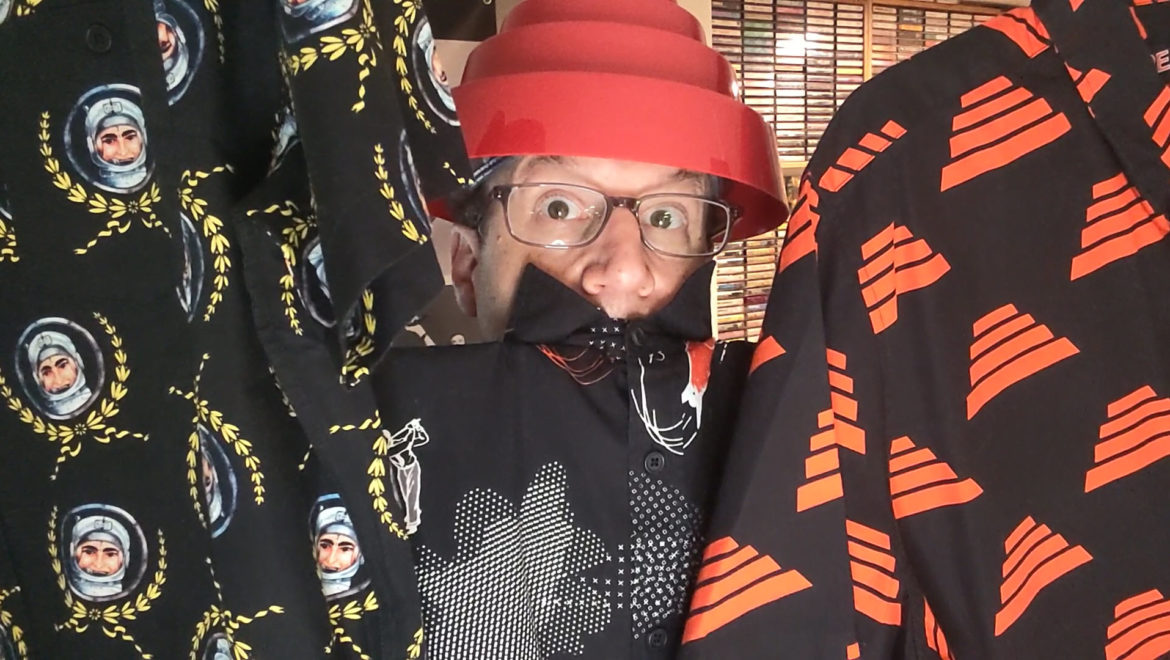 Unveiling New Products by DEVO & Middle Of Beyond! 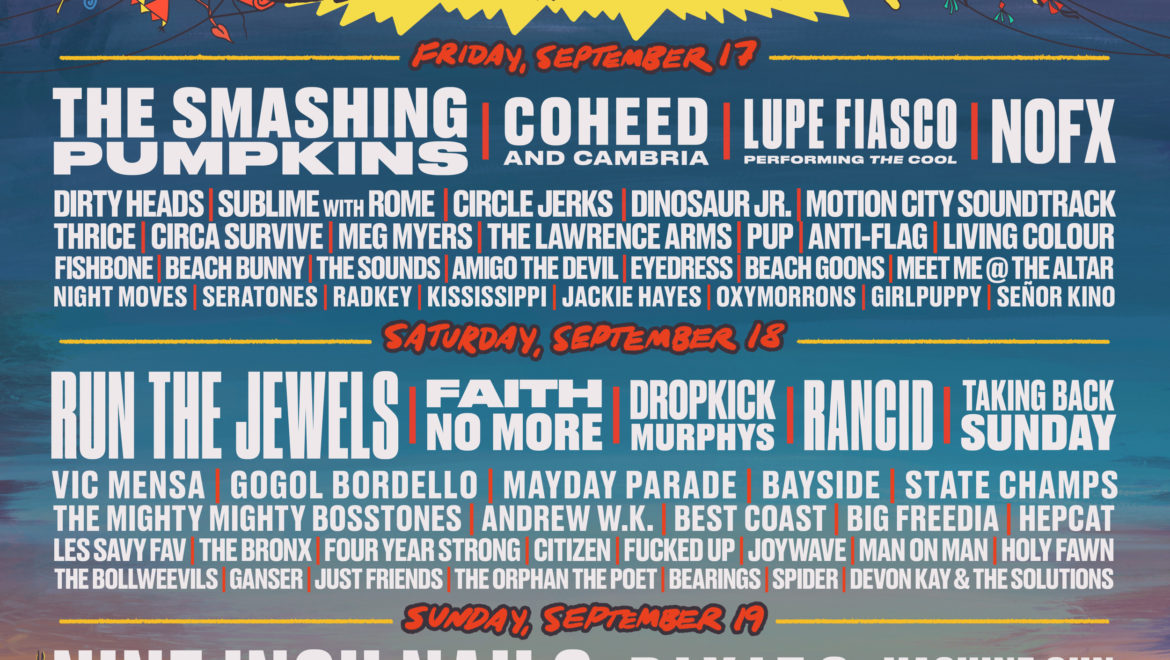 Devo to perform at Riot Fest!

Get your tickets now at the Riot Fest official website 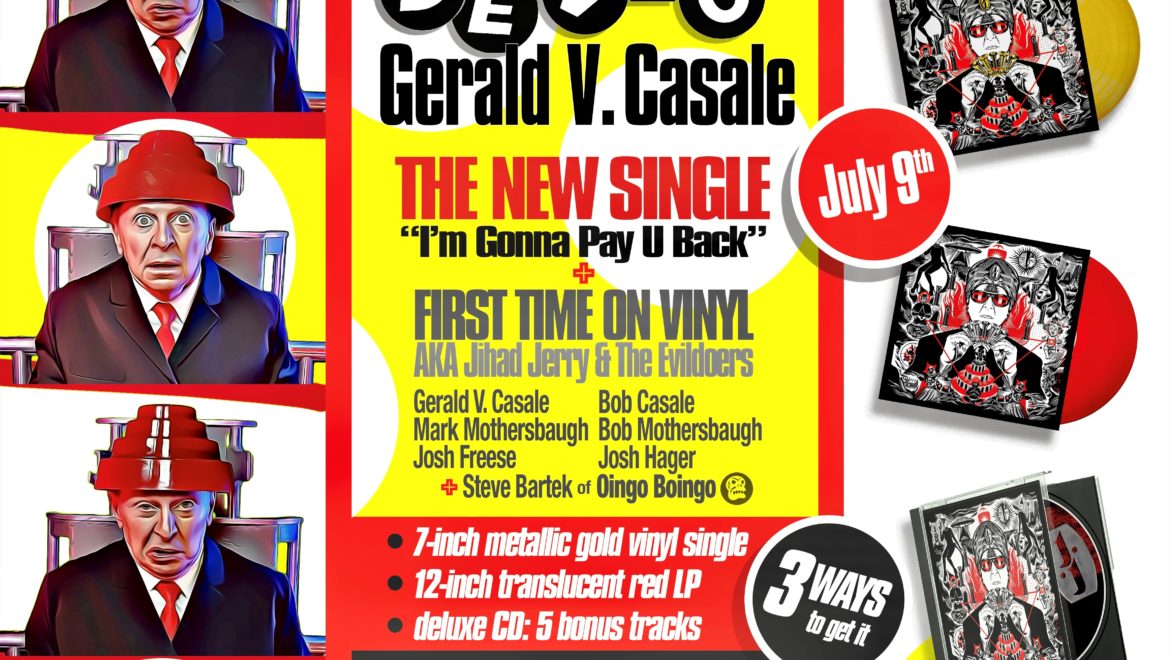 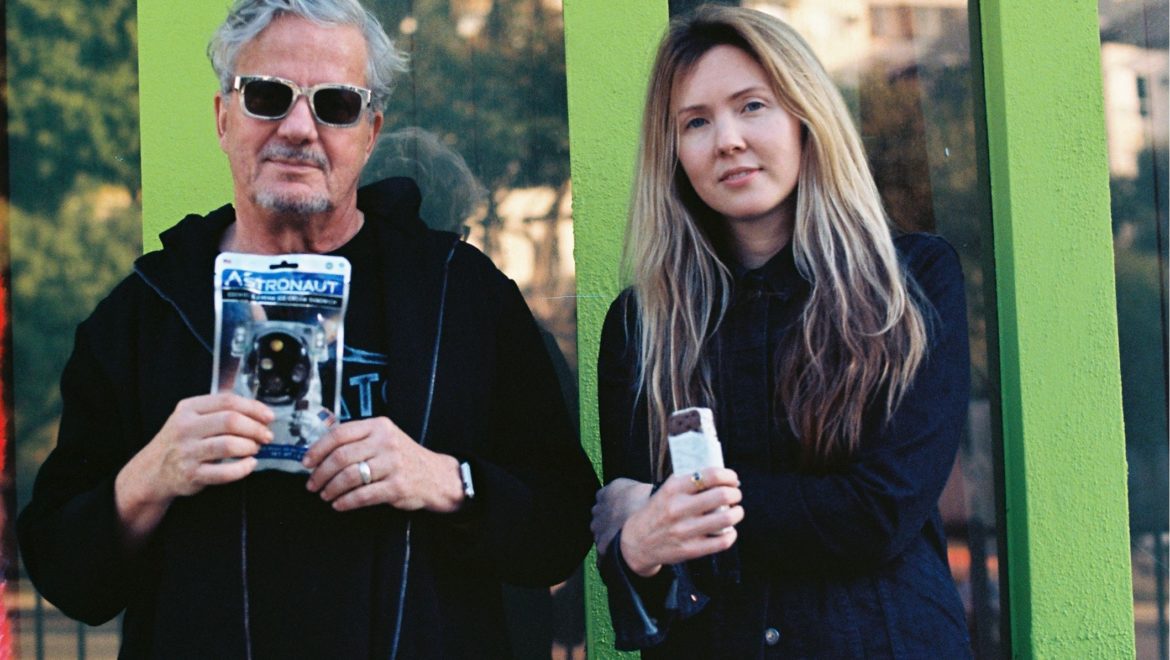 Artistic visionaries Mark Mothersbaugh and Beatie Wolfe – who share a love of tangible art-forms, in and amongst their futuristic explorations – joined forces to create Postcards for Democracy, a collective art campaign in support of the United States Postal Service (USPS) and its essential role in our elections.

The resulting Gallery exhibition is expansive, immersive and participatory, but the concept continues to be quite simple: create and mail your postcard design to 8760 Sunset Blvd, Los Angeles, CA 90069 to become part of this art demonstration and in doing so support USPS and democracy in the process.

The pair have received thousands of cards to date covering themes such as covid, democracy, capitalism, the environment, social injustice, science and even insomnia. Together these postcards (like the exhibition itself) form something of a time capsule – reflecting our collective experience personally, socially, societally, politically, and environmentally – while the archive expands with ongoing contributions

This May through August, the Bob Rauschenberg Gallery will collaborate with the artists to present a site-specific installation: the first public showing of Postcards for Democracy. Both Mothersbaugh and Wolfe have strong ties with Rauschenberg’s work and ethos, Mothersbaugh in his adoption of Pop imagery and early experimentation with industrial printing techniques (including cyanotype) and Wolfe due to her reboot of the Rauschenberg founded E.A.T. programme (Experiments in Art and Technology) of the late 60s with her Raw Space project.

“What better way than to use the very system of the USPS as proof of concept that if we protest through art and connection, we not only capture this moment, but we also create a movement and preserve it for posterity.” – Mark Mothersbaugh

“Lockdown has reminded me of the joy and importance of physical comms at a time when it’s more important than ever. And mail connects us in a way that technology never can. So let’s use it before we lose it!” – Beatie Wolfe

As a young art student at Kent State University, Mothersbaugh first started making postcard art in the early ’70’s and exchanging work with known and unknown artists alike. Through these exchanges, he realized that he was creating an image bank and a lyric collection that served as a basis of inspiration that he would later use in the creation of his seminal art-rock band, DEVO.  Since then, he has filled over 576 archival volumes of 100 cards each. These cards became the basis of his most recent show Myopia, a retrospective beginning in 2015 focusing on modern man’s ongoing, internal dialogue of beatnik stream of consciousness poetry, the surrendering of the intellect to the primordial and science vs. faith.

Mark has shown his visual art in over 125 solo exhibits over the last 35 years, with touring shows “Homeland Invasion”, “Beautiful Mutants”, and “Myopia”, a 3,000 object retrospective in 2015. His art has been featured on numerous books, album art, and consumer products. He has collaborated musically with artists such as Brian Eno, David Bowie, Iggy Pop, Beck, The B52s, and Neil Young to name a few.

He was given an honorary doctorate of humanitarian letters from Kent State in 2008… markmothersbaughart.com

”Musical weirdo and visionary” Beatie Wolfe is an artist who has beamed her music into space, been appointed a UN Women role model for innovation, and held an acclaimed solo exhibition of her ‘world first’ album designs at the Victoria & Albert Museum.

Named by WIRED Magazine as one of “22 people changing the world,” singer-songwriter and innovator Beatie Wolfe is at the forefront of pioneering new formats for music that bridge the physical and digital, which include: a 3D theatre for the palm of your hand; a wearable record jacket – cut by Bowie/ Hendrix’s tailor out of fabric woven with Wolfe’s music – and most recently an ‘anti-stream’ from the quietest room on earth and space beam via the Big Bang horn.

The Barbican recently commissioned a documentary about Beatie Wolfe’s pioneering work titled Orange Juice for the Ears: From Space Beams to Anti-Streams and Wolfe’s latest innovation is an environmental protest piece built using 800,000 years of historic data that will be premiered at the London Design Biennale in 2021… beatiewolfe.com 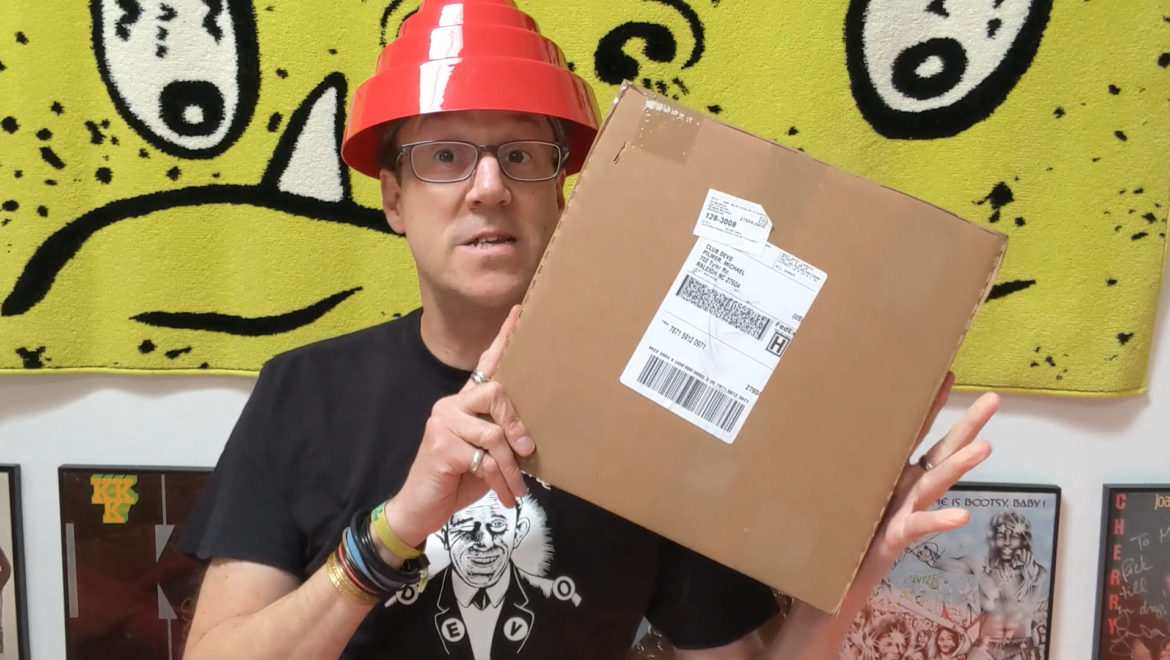 DEVO-Obsesso gives you a peek at our newest vinyl for RSD Drops 2021.
SEE VIDEO HERE

Buy the ticket, take the ride! Hope to see you all in Vegas! 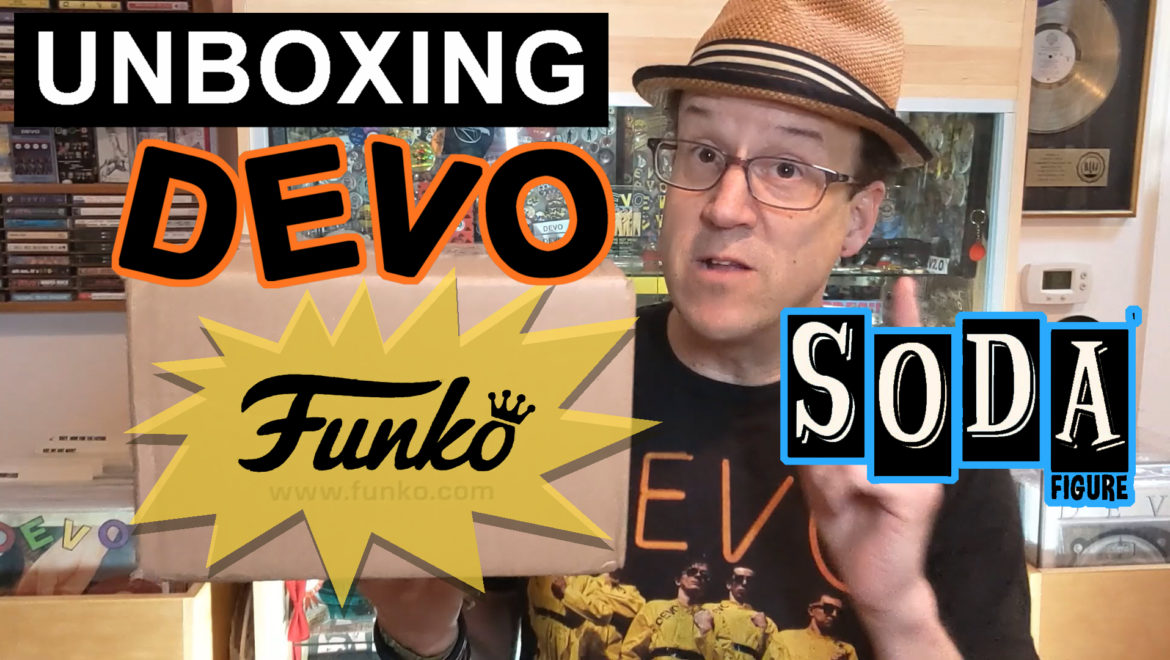 Go to www.Funko.com for more info. 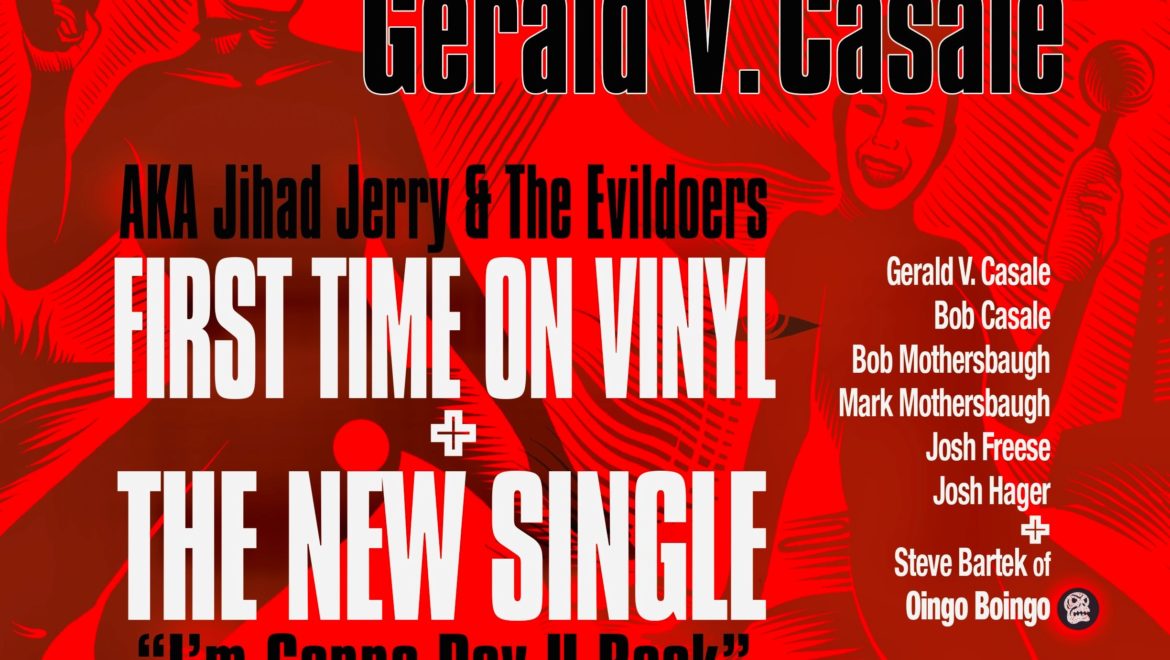 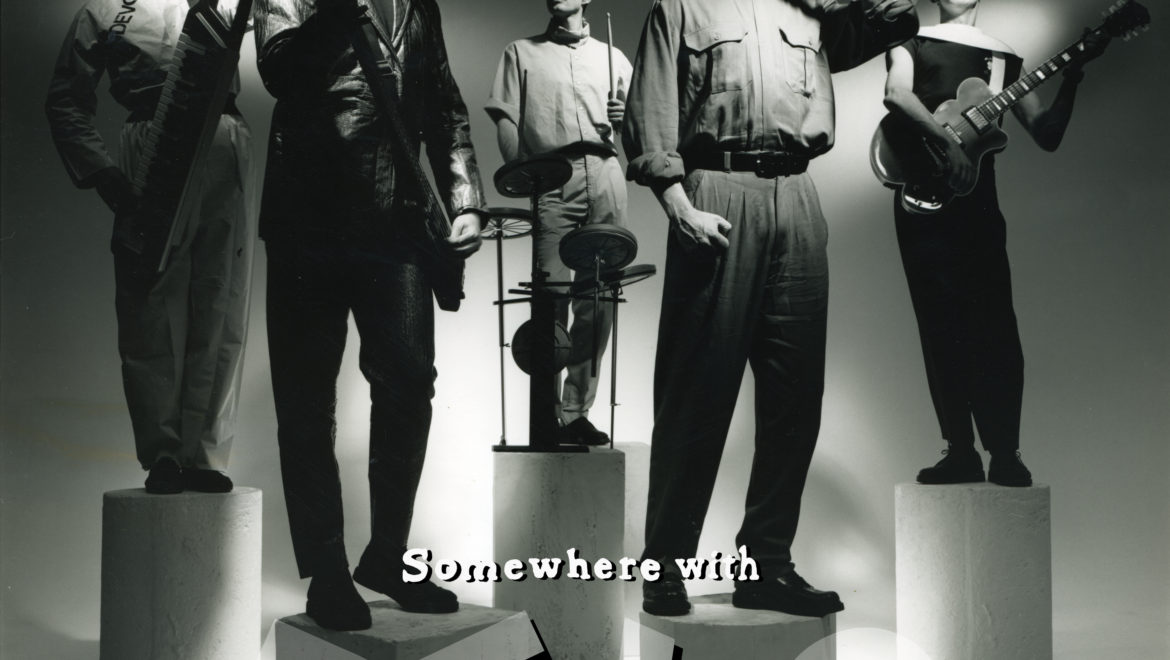 ATTN DEVOTEES: “Somewhere With DEVO” will be in record stores starting June 12th as part of RSD Drops. Find a participating record store near you. 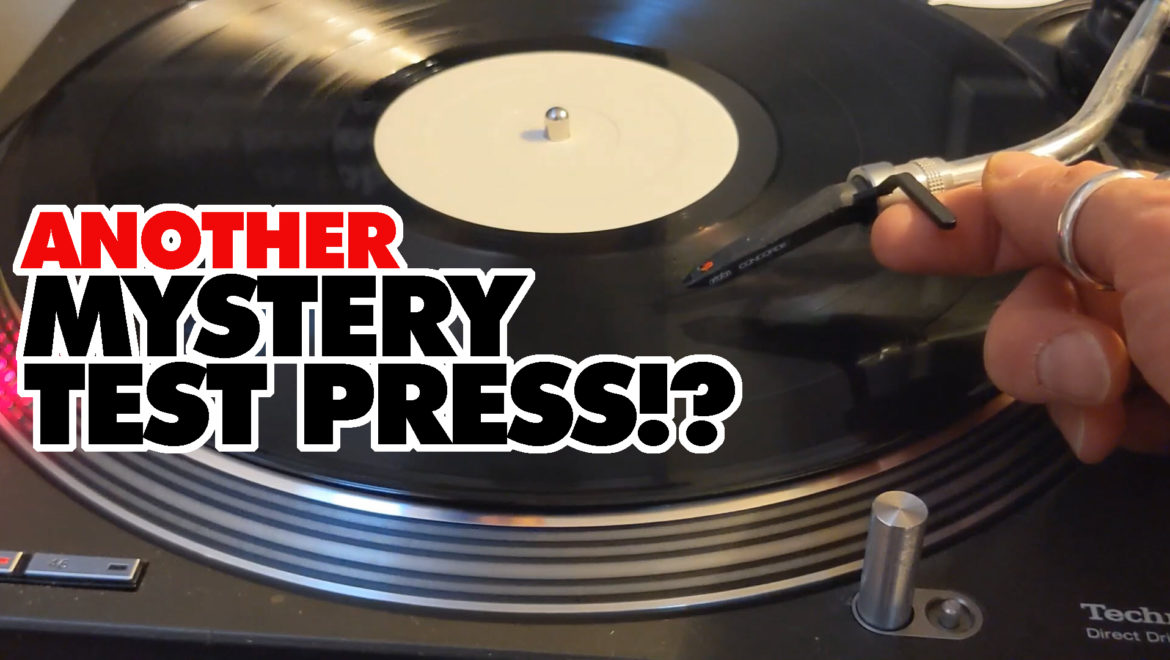