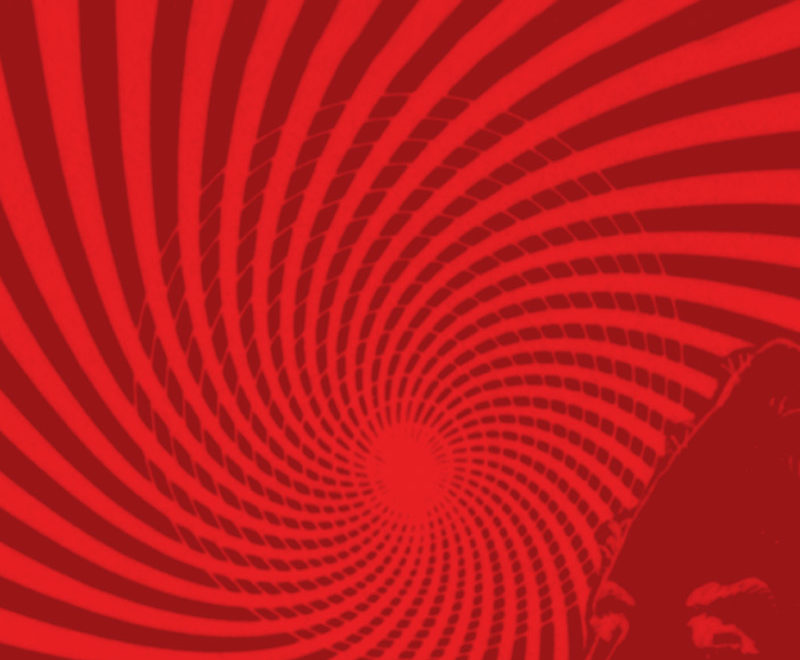 Hello DEVO first off I love your music and I was wondering if you have any plans to do a full tour in the near future? I would love to see you guys live. Shame on me for not doing so. Seeing Devo live would be a privilege. Your music is good for the soul. Thank you for time and all of the wonderful music. 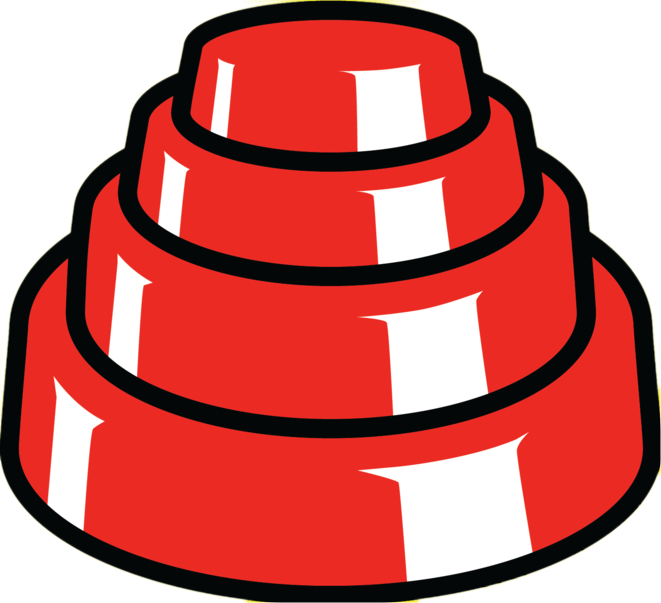 Why do o I get a sense of spud power every time I put on my energy dome? 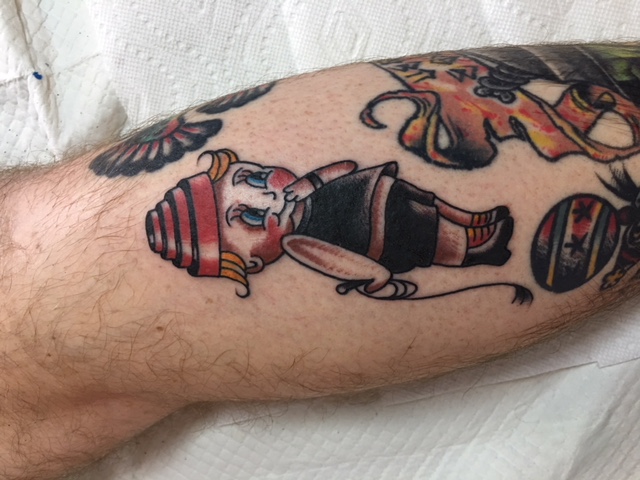 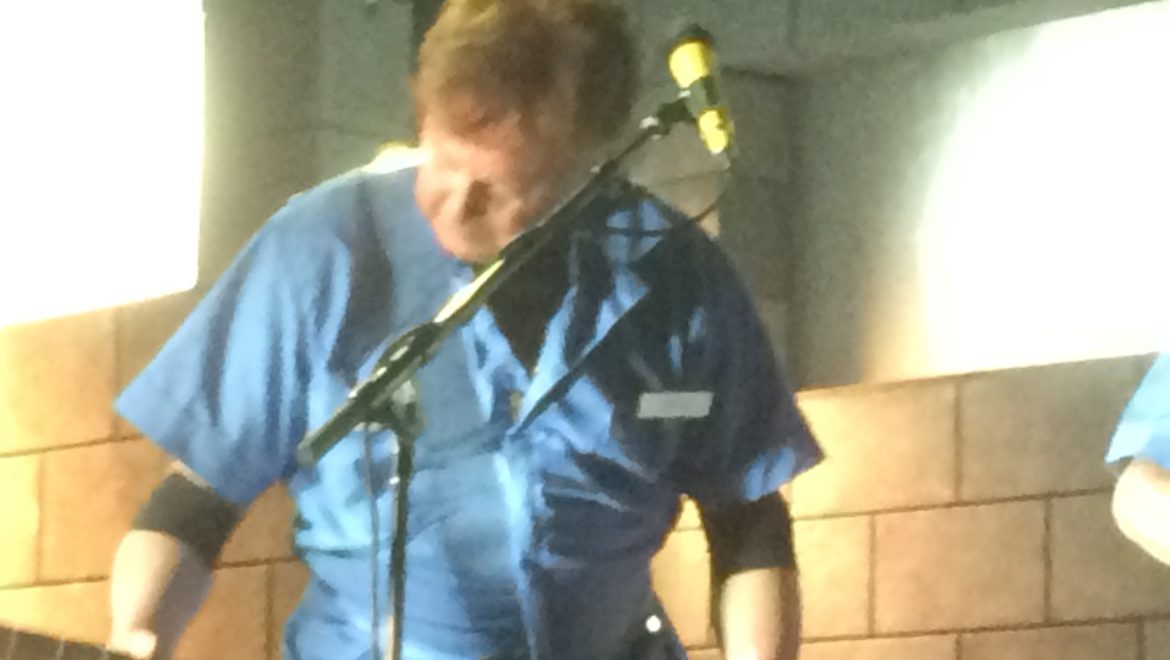 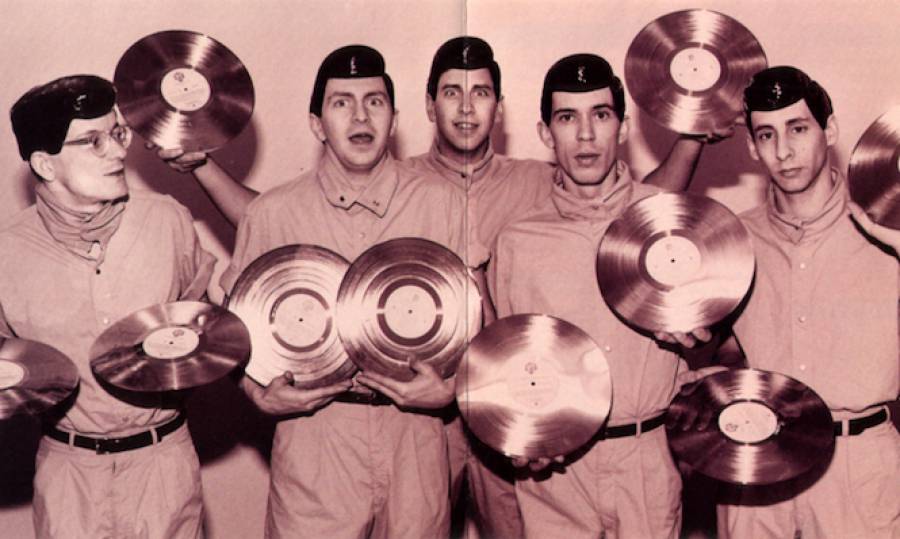 An Intro To DEVO In 10 Records

NOW FOR THE FUTURE: AN INTRODUCTION TO ART POP PIONEERS DEVO IN 10 RECORDS

An indispensable introduction to the music of oft misunderstood art rock synth poppers Devo through 10 essential records (well, 9 and one DVD). Deconstructing the De-volution is Del Jae Williams of Futurismo, the label responsible for the brilliant release of Devo’s 1977 live show Miracle Witness Hour. 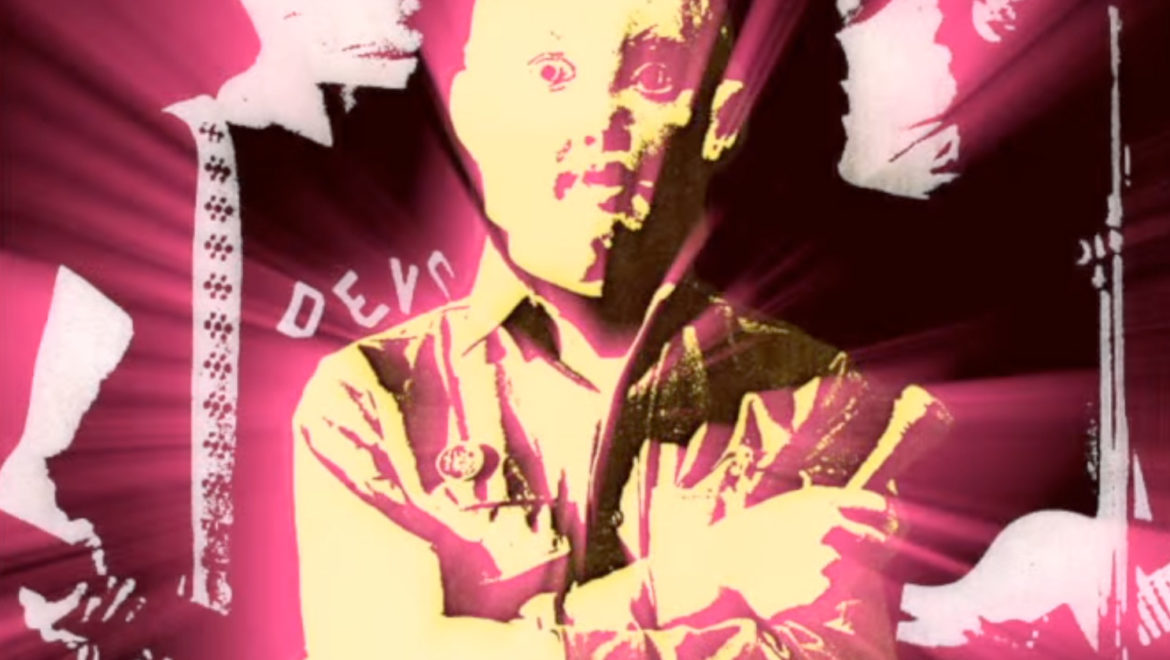 Spuds  –  Here’s Part 4 of a 4 part video series in which our pal Booji Boy promotes DEVO’s upcoming tour which starts in June. We gave him a microphone and some video toys and this is what happened! Links to the other 3 videos are also posted here. ENJOY! 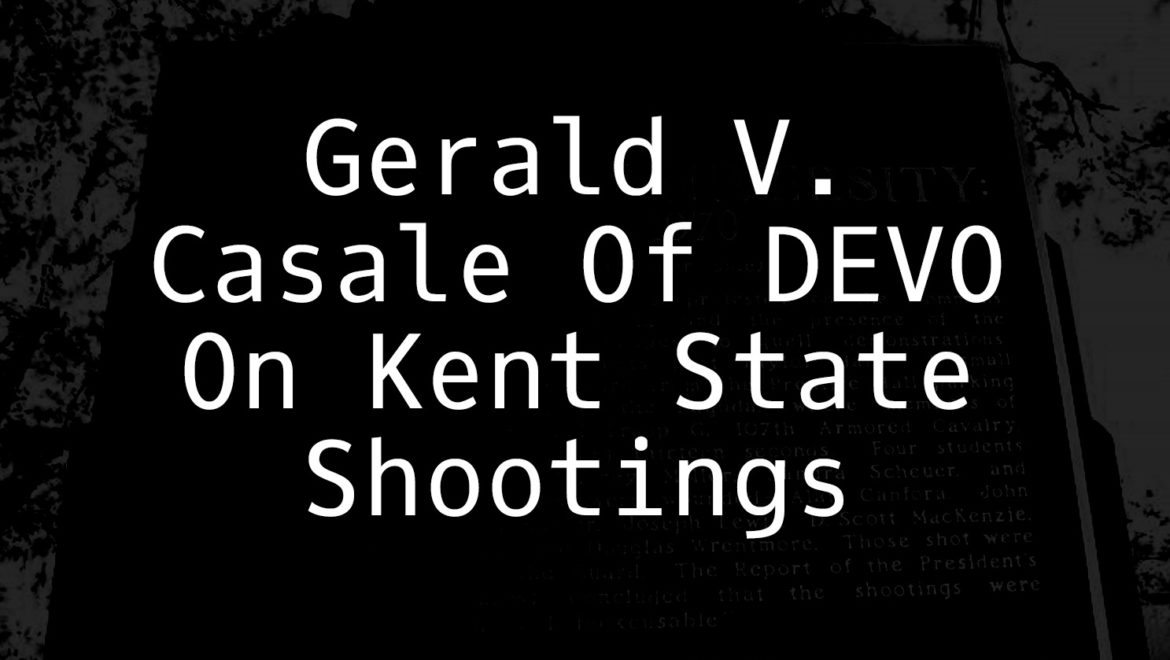 GERALD V. CASALE’S SPEECH at KENT STATE UNIVERSITY (From May 4th, 2010) on the 40th Anniversary of the shootings:

Hello. I’m Gerald Casale, Honors College class of 1970, Kent State Alumni and founder and co-songwriter of the music group, DEVO. I’m honored to be here today to address old friends and acquaintances as well as young people who were not alive when the killing and wounding of students at Kent State occurred 40 years ago.

I was not only there then, I was in the thick of it, retreating from the National Guardsmen and choking on tear gas along with hundreds of fellow students. To paraphrase an old country song, “we didn’t know the guns were loaded”. I could have been shot and killed. I was closer to the gunfire than Jeffery Miller or Allison Krause, freshmen students who I had befriended when I helped them register for Fall classes at KSU in the summer of 1969.

But I lucked out unlike them.

I escaped the random, scattergun fate meted out by part-time soldiers the same age as those they killed and wounded. That day in May was the single most traumatic moment of my entire life.

I remember the sights, sounds and horrific mix of toxic chemicals and gunpowder fouling the crisp spring air on that blue-sky day. I remember the sudden, shocking edit into slow motion, as in a car crash where you suddenly contemplate the end of your life. I remember the screaming and moaning swelling from the crowd as we realized almost in unison that students had been shot. There were bodies on the ground, and shiny red blood flowing down the sidewalks and asphalt road in the noonday sun. Students and teachers frozen in position began falling to their knees weeping, begging for calm. The soldiers clutching their M1 rifles at the top of the hill looked on like scared little boys playing war. The bullets were real though.

For many others, and myself that single moment changed the dynamic of civil disobedience forever. It changed my world-view and without question set me on a path I would never have traveled otherwise.

My eyes were opened. Brute power had won the day. As George Orwell said “history is the boot coming down in the face of humanity over and over again“.

I wanted to retaliate. I wanted justice.

But, for Jeffery, Allison, Sandra and William and the maimed and wounded it turned out there would never be justice. That’s why I’m here today, to try to dispense a small kernel of justice by giving personal testament to the significance of the deaths that occurred here 40 years ago. Though the forces of illegitimate authority and the agenda of the victors who write history have conspired against truth and remembrance, we must never forget why Jeffery, Allison, Sandra, William and the rest gathered on the KSU Commons that day in 1970.

They were there as was I because we had been watching and paying attention as the Constitution and the Bill of Rights were being twisted and misappropriated by President Richard Nixon in order to justify his expansion of the heinous Vietnam War into Cambodia without an act of Congress. We were there because SDS, in solidarity with the Black Students Union, had clashed previously with Oakland Police Force recruiters who had come to our campus. We were there because we had watched in horror at the serial assassinations of Martin Luther King, Malcolm X and RFK. We were there because there was a collective sense that our country was turning inside out from forces so dark and hateful that doom and gloom ruled over our normal rights of spring.

That was then. Today apathy has replaced activism. Today the notion that students would be upset about such corrupt maneuvering by our government seems antiquated, almost cute. Today it seems that most lack the critical thinking framework to draw any conclusions – to even know why to be upset enough to protest about some action or policy that might affect them for generations to come. Instead they regurgitate sound bites from Fox News. But they do get upset about Best Buy running out of the XBOX 360 at Christmas time.

We have been marching backward full speed ahead. The level of discourse has been so dumbed down that last year Octo Mom was the biggest story 8 weeks running. It’s all too much like Mike Judge’s thinly veiled satirical movie, “Idiocracy” where a present day slacker who is cryogenically frozen, wakes up in the U.S. 300 years in the future and finds that he is the smartest guy in a country run by WalMart. The right wing forces systematically decimated the public education system in America ever since that time we struggled through. They did their job well. Almost each erosion of freedom and fair play that we in 60’s counterculture warned about has come to pass. And yet most of us who DO NOT drink the Corporate Kool-Aid and who do know better lack a civic-minded value system. We say we are “not political”. We pay attention to our 401 K’s. We live in fear and step in time to the New World Order.

So, here we are today where Tweets and Facebook smack-downs are the stuff of life crisis.

40 years ago however, while there were those who mindlessly waved the flag and couldn’t wait to dismiss the mess of Democracy in favor of unfettered Capitalism, there was a large opposing force of informed people; writers, statesman, professors, students, working people, oppressed minorities – the black community, women and more who understood the nature of the cultural civil war we were immersed in.

They knew that in one sense everything is political; it’s an inescapable fact in a world where people must live together. They knew that freedoms were hard fought and easily eroded over time in the absence of vigilance.

>Back then in 1970 we were trying each in our own capacity to beat back the encroachment of the much discussed Military Industrial Complex as it marched rough-shod towards a Chinese-like Corporate Feudal State where the centralization of power could let it reign absolute. In it’s face we were stridently advancing humane social models and decentralized government that would least exacerbate the fact that we are all here, fated to suffer and die in the first place.

Why did these authoritarian foes of ours want to ruthlessly exploit the human condition? Why would they not want to help out? We were naive students to say the least. I feel history proves our vision lost to the cynical Karl Rove-type dweebs that were our classmates. Thanks to their ilk a patriot is a mercenary soldier who gets paid to kill.

The 24 /7 imprint machine called Cable News says he’s a hero. On the other hand they say a protester is a troublemaker, the nail that sticks out that must be hammered.

To me the true patriots were out there on the KSU Commons 40 years ago, exercising their constitutional rights, covering their eyes and noses with bandanas while trying bravely to throw the tear gas canisters out of the field of protest as they raged against Nixon’s blatant middle finger to the principles of the country of which he was Commander and Chief.

Jeffery, Allison, Sandra and William are nothing less than 20th Century martyrs for this reason alone.

Martyrs as well were James Earl Green and Phillip Gibbs, unarmed students killed by police a few days later at Jackson State University in an eerie replay of the state-sanctioned thuggery at Kent State May 4th.

When the smoke settled after May 4th and the police blamed the students and popular media polls indicated that the majority of Americans thought we deserved to be shot, and James Michener marched through town to white wash the event in a shamefully biased account, the horror quickly faded except for those of us who were there.

Years later the courts finished off the insult by dismissing a class action suit brought by the families of the murdered and wounded students. So many worldwide, large scale atrocities had followed in the ensuing years that a handful of student deaths seemed inconsequential to a public numbed by state sponsored slaughter.

I say these things now but I readily admit in 1970 I was not the most devout political activist. Rick Erickson, his then wife Carolyn Knox, Howie Emmer, Jim Powrie, Ken Hammond, Colin Neiburger, Danny Miller, Alan Canfora and many other dedicated students taught me the clear analysis of what was happening in our supposed land of the free. They were not extremists or wackos, they were just Canaries in a coalmine.

Our adversaries of course labeled and marginalized these vocal students as treasonous vermin. That tactic is time tested and true. Now the popular epithets are “liberal” (the new “communist”) and of course “Terrorist”. Nothing has changed. Who are these terrorists, really? It seems one man’s Terrorist is another man’s Freedom Fighter. In fact I submit that we were the victims of terror from WITHIN that day, May 4th 1970. Unarmed and unprepared we were psychologically scarred for life by state-sanctioned, violent terror. It’s always the MO of absolute power the same as the MO of a rapist or a physically abusive parent. The victim is scarred for life; numbed and conditioned by fear to accept each new terrorizing event. What happened to us in 1970 is not in some historical lock box. It can and will happen again and again.

I know it’s probably very hard for a young person to imagine that. Unfortunately, I say imagine it. Understand it. Be ready for it or you will be swallowed in the quicksand of history. How many here believed Bush’s ginned up rational for the Iraq war? How many here took any action against his boldface lies? By the way, speaking of lies, as an eyewitness to the May 4th massacre I can tell you there WAS an order to shoot that day.

For Jeffrey, Allison, Sandra and William and all who unjustly lost their lives to corrupt power, I say to anyone listening: Never forget. Never Forget! 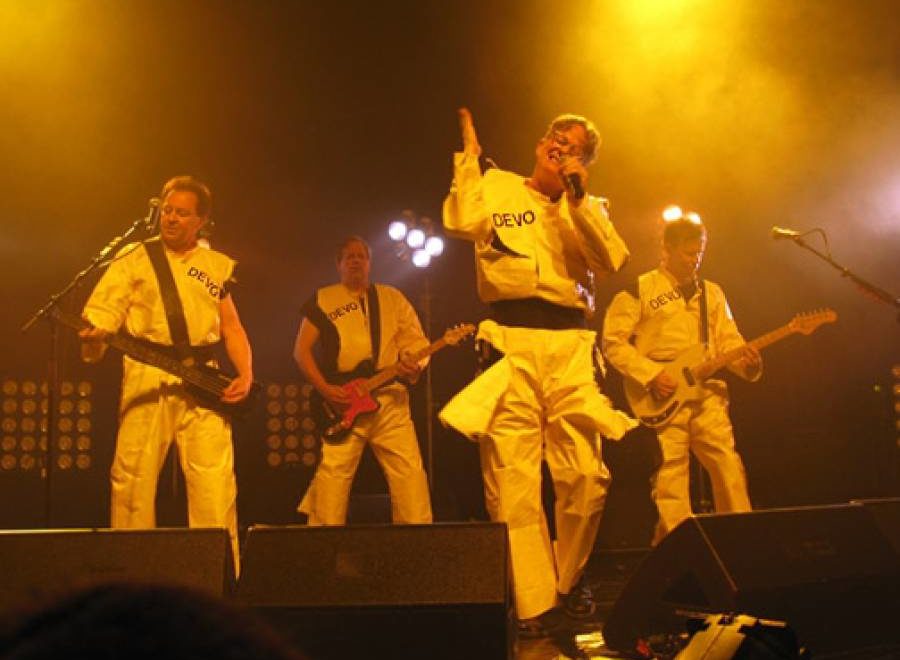 DEVO performs “Praying Hands” at The Regency Ballroom in San Francisco, CA – Nov. 6, 2009 (DEVO’s “Are We Not Men?” Album Show). Photo by John Ackley. Feel free to distribute on Facebook & Twitter, giving credit to John Ackley. To use anywhere else, please contact michael@devo-obsesso.com for permission.